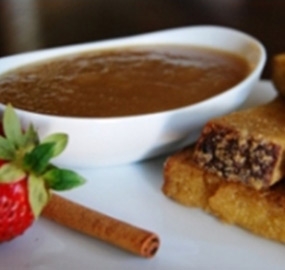 When the leaves are falling and the air is getting crisp, it’s time to serve this delight.

Sometimes you find a recipe that becomes a kitchen staple: this recipe for a Cinnamon Apple Dip one of those recipes. It’s a recipe you will memorize, and you’ll likely find dozens of opportunities to use it.

Cinnamon Apple Dip calls for a few simple ingredients you likely already have on hand: applesauce, vanilla, maple syrup, and cinnamon. It comes together in 30 seconds and can be warmed in the microwave in just 2 minutes. Our French Toast Sticks, which are eminently dippable, are divine with this dip. You’ll crave this sweet combo.

Cinnamon Apple Dip is also extremely versatile: it’s nice served over vanilla ice cream or for dipping fresh apple or pear slices. A spoonful mixed into a warm bowl of oatmeal is amazing. Use it to top pies, cakes, muffins, or serve it as fondue with pretzels. Top it off with chopped pecans or a pinch of sea salt. Honestly, it’s so good, you may be tempted to eat it by the spoonful all by itself.